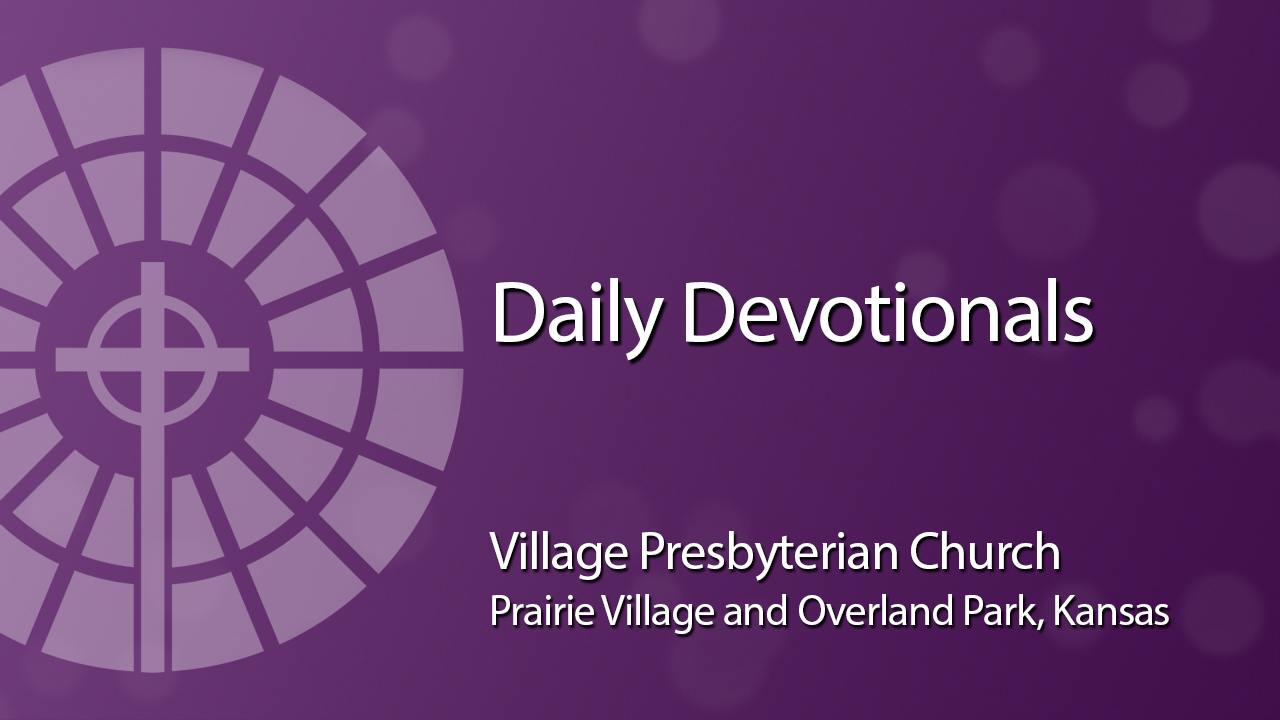 We taking a  summer break from Daily Devotionals after today (5/29).
​Devotionals will resume in the fall.
May 29
​

Awe came upon everyone, because many wonders and signs were being done by the apostles. All who believed were together and had all things in common; they would sell their possessions and goods and distribute the proceeds to all, as any had need. Day by day, as they spent much time together in the temple, they broke bread at home and ate their food with glad and generous hearts, praising God and having the goodwill of all the people. And day by day the Lord added to their number those who were being saved.

In response to the good news of Jesus Christ, the first converts become the first church. These verses say that in the first church, the believers were together and “had all things in common.” It says the first church members sold all that they had and pooled their resources together and shared them with one another. In a highly stratified society, this radical way of living would no doubt have caught the attention of people around them. The early believers spent every day together in the temple. They ate together in each other’s homes and praised God. The result? People thought well of these followers of Jesus of Nazareth. And the description of the early church ends by noting that each day God added to their number those who were being saved. That is a lesson for us today. When people see how we love one another and care for one another, they will be drawn to the good news of Jesus. Let us be known as people who truly love God and love one another!
May 28
​
Acts 2:37-42

Now when they heard this, they were cut to the heart and said to Peter and to the other apostles, ‘Brothers, what should we do?’ Peter said to them, ‘Repent, and be baptized every one of you in the name of Jesus Christ so that your sins may be forgiven; and you will receive the gift of the Holy Spirit. For the promise is for you, for your children, and for all who are far away, everyone whom the Lord our God calls to him.’ And he testified with many other arguments and exhorted them, saying, ‘Save yourselves from this corrupt generation.’ So those who welcomed his message were baptized, and that day about three thousand persons were added. They devoted themselves to the apostles’ teaching and fellowship, to the breaking of bread and the prayers.

When Peter finishes his first sermon, the hearers are moved. They are so moved that they turn away from sin and sinfulness and toward God. They claim the promise that Peter has shared with them and not just for them but for their children and for all. It is remarkable that God’s promise of life everlasting is limitless. They are so convicted by Peter’s preaching, that thousands turn to Jesus Christ – the first converts of the church! Luke writes that these new church people do four things: they study God’s word together, they build relationships with one another, they share a meal together, and they pray together. Theologians call these the marks of the church: to study, to be in fellowship, to share with one another, and to pray and worship God. For a church to be church, we must do these four things all for the glory of God.
May 27
​
Acts 2:25-36

For David says concerning him,
“I saw the Lord always before me,
for he is at my right hand so that I will not be shaken;
therefore my heart was glad, and my tongue rejoiced;
moreover, my flesh will live in hope.
For you will not abandon my soul to Hades,
or let your Holy One experience corruption.
You have made known to me the ways of life;
you will make me full of gladness with your presence.”
‘Fellow Israelites, I may say to you confidently of our ancestor David that he both died and was buried, and his tomb is with us to this day. Since he was a prophet, he knew that God had sworn with an oath to him that he would put one of his descendants on his throne. Foreseeing this, Davidspoke of the resurrection of the Messiah, saying,
“He was not abandoned to Hades,
nor did his flesh experience corruption.”
This Jesus God raised up, and of that all of us are witnesses. Being therefore exalted at the right hand of God, and having received from the Father the promise of the Holy Spirit, he has poured out this that you both see and hear. For David did not ascend into the heavens, but he himself says,
“The Lord said to my Lord,
‘Sit at my right hand,
until I make your enemies your footstool.’ ”
Therefore let the entire house of Israel know with certainty that God has made him both Lord and Messiah, this Jesus whom you crucified.’

In the closing portion of Peter’s sermon, Peter quotes for Psalm 16 to explain how Jesus of Nazareth is a descendent of King David. This was important because the Old Testament said the Messiah would be an ancestor of David. He uses Psalm 16 to also illustrate how the Messiah, the anointed one, would be raised from the dead. Peter preaches all of this to help the hearers understand that in Jesus of Nazareth, we have both “Lord and Messiah.” From this first day of the church, Peter sought to explain the identity of Jesus. This question of “Who was Jesus of Nazareth?” continues today. In the gospel stories, Jesus asks his disciples who people say he is. Then, he turns to them and asks them who they think he is. For the early church, the question was answered with four words: Jesus Christ is Lord! This was a dangerous thing to say. Across the Roman empire, only Caesar was Lord. It was this bold claim that would get the Christians in trouble and Peter knew it. He also knew that these words would change the world.
May 26
​
Acts 2:22-24

‘You that are Israelites, listen to what I have to say: Jesus of Nazareth, a man attested to you by God with deeds of power, wonders, and signs that God did through him among you, as you yourselves know— this man, handed over to you according to the definite plan and foreknowledge of God, you crucified and killed by the hands of those outside the law. But God raised him up, having freed him from death, because it was impossible for him to be held in its power.

Theologian Maria Harris said these three verses are the most important in the Acts of the Apostles because in just a few words, they tell the story of the gospel. They tell exactly what God did in the person of Jesus Christ. Jesus lived among the people demonstrating power and showing wonders and signs. He was then tortured and killed. Then he was raised from the dead. Harris says three words encapsulate the whole of the gospel: living, dying, rising. Jesus lived among us. He sacrificed himself and died. Then he rose from the dead to prove that he had power over death. Whenever anyone asks you what Christianity is all about, all you have to say is: living, dying, rising. We, like Jesus, are living each day by the grace of God. We are dying to sin and selfishness and hurtfulness. And we are rising with joy and hope living toward God’s promised day!
May 25
​
Acts 2:14-21

But Peter, standing with the eleven, raised his voice and addressed them: ‘Men of Judea and all who live in Jerusalem, let this be known to you, and listen to what I say. Indeed, these are not drunk, as you suppose, for it is only nine o’clock in the morning. No, this is what was spoken through the prophet Joel:
“In the last days it will be, God declares,
that I will pour out my Spirit upon all flesh,
and your sons and your daughters shall prophesy,
and your young men shall see visions,
and your old men shall dream dreams.
Even upon my slaves, both men and women,
in those days I will pour out my Spirit;
and they shall prophesy.
And I will show portents in the heaven above
and signs on the earth below,
blood, and fire, and smoky mist.
The sun shall be turned to darkness
and the moon to blood,
before the coming of the Lord’s great and glorious day.
Then everyone who calls on the name of the Lord shall be saved.”

This is Peter’s first sermon and as far as first sermons go, it’s a doozy. A crowd gathers around the house where the disciples are staying. Apparently, they are drawn by sound of the Holy Spirit coming to the disciples. Empowered by the Spirit, he explains what has happened by quoting from the prophet Joel. This would have greatly impressed his faithful Jewish listeners. Joel says that God will pour out God’s Spirit upon all people (not just Jews, not just free people!?) and sons and daughters will speak the truth and the young will see the world through God’s eyes and the old will remember God’s faithfulness. There will be dramatic signs of God’s faithfulness in the creation and all who call out to God will be saved. For a people who are searching for God, Peter’s first sermon gives them a powerful answer. Pay attention! Because God’s Spirit is loose in the world. As we emerge from this pandemic, pay attention. Because Pentecost has come and God’s Spirit is among us!
May 24
​
Acts 2:1-13

When the day of Pentecost had come, they were all together in one place.And suddenly from heaven there came a sound like the rush of a violent wind, and it filled the entire house where they were sitting. Divided tongues, as of fire, appeared among them, and a tongue rested on each of them. All of them were filled with the Holy Spirit and began to speak in other languages, as the Spirit gave them ability.
​
Now there were devout Jews from every nation under heaven living in Jerusalem. And at this sound the crowd gathered and was bewildered, because each one heard them speaking in the native language of each.Amazed and astonished, they asked, ‘Are not all these who are speaking Galileans? And how is it that we hear, each of us, in our own native language? Parthians, Medes, Elamites, and residents of Mesopotamia, Judea and Cappadocia, Pontus and Asia, Phrygia and Pamphylia, Egypt and the parts of Libya belonging to Cyrene, and visitors from Rome, both Jews and proselytes, Cretans and Arabs—in our own languages we hear them speaking about God’s deeds of power.’ All were amazed and perplexed, saying to one another, ‘What does this mean?’ But others sneered and said, ‘They are filled with new wine.’

Pentecost is one of the festivals of the Jewish people. It happens 50 days after Passover. Jews from all over the world would come to Jerusalem for the festival. It is on this day that the Holy Spirit comes to the disciples, the followers of Jesus. The story is a dramatic and powerful one. When the Holy Spirit descends on these local boys from Galilee, they are suddenly able to speak in the many languages of the world as if they were native speakers! The rest of the book of Acts tells about how the gospel, the good news of Jesus, is shared. It is significant that this book is the Acts of the Apostles not the Acts of the Disciples. An apostle is one who is sent out. These followers of Jesus who were disciples now become apostles. They are sent into the world. Remember this day that you are an apostle. You are one who is sent to share the good news of Jesus with the whole world.